This may be about Scotland, but it is relevant for everywhere. A Green New Deal is not just a programme, it is a revolution – to the betterment of us all. The question is if we can comprehend it as such?

One of those great Sunday reads. 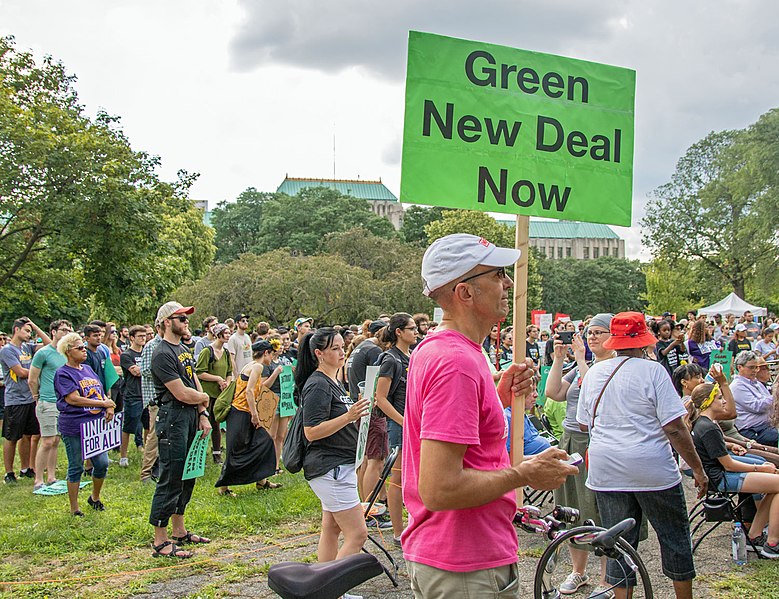 Ahead of the launch of Common Weal’s Green New Deal report this weekend, Robin McAlpine argues that pursuing utopian ideals is more necessary than ever

One of my final dissertations at university was on utopia. I read more than a dozen historical utopias from Thomas More’s 500-year-old original up until about the 1960s after which they peter out – my conclusion being we didn’t have a utopia for our generation.

That was nearly 30 years ago and it is why I’ve spent a good chunk of my life trying to develop policies for a kind of practical, real-world utopia. While I’ve always been able to see some of the picture, for me the Green New Deal report we’re launching on Saturday (come!) fills in the blanks.

I can now, for the first time in my life, see a detailed picture of a real, achievable society that is as close to a utopia as I think I’m likely to see.

This has been probably the most intensive project I’ve ever worked on in my life. We set ourselves the challenge of taking on all of the negative environmental impacts Scotland has on the world (give or take a nuke) and trying to fix them – all of them, not just climate change.

And we set ourselves horrible deadlines because it is all so urgent. I underestimated how difficult some of it is to fix, how many calculations it would take, how big in scale is the work needed. I think I’ve learned more on this project than on any other I’ve been involved with.

It has been truly exhausting and has taken some long hours. But what has made it easy to keep going is the view from the top, the sense of what is really possible after you’ve ruled out what is impossible.

In fact, if you’ve picked up my deep and growing frustration at Scotland’s current policy agenda and the (at best) glacial pace at which progress to independence is being made you might conclude that this is just me being awfully pessimistic.

It’s not, it’s the opposite – it’s because I feel more optimistic about Scotland’s potential future than any time I can remember, including the 2014 referendum campaign.

There is something really freeing, really uplifting about discovering that the big problems you thought were intractable or just beyond solving by any one nation can in fact be tackled in a calm and systematic way. It’s like being told your condition isn’t fatal after all, that there’s a cure.

It would be quite enough if that was all this project had done for me. After all, it’s mostly just a big engineering job and perhaps not what everyone thought the revolution would look like.

So I will use here an analogy that is used a number of times in the report; the Victorian programme of sewer-building. The report uses it to explain why there is no market solution to these problems or why it’s not about individual action – how would you set tax perks so that the private sector ‘just builds’ sewers, or how could you make citizens responsible for building 100 metres of sewer each?

But there’s another reason the analogy is directly relevant; technically a sewer may be nothing more than tunnels of shit and water, nothing to get excited about. But the impact was so much more than that.

It was one of the crucial foundations for society as we know it. The squalor and stench and disease from the era before municipal sewage was deeply unpleasant for the rich but often fatal for the poor. That ‘boring’ engineering job utterly transformed the lives of millions.

Each of them would make a really big difference, but they are all trying to fix the problems caused by the fundamental structures of our economy and society. They should be the answers, but they are swimming against such a strong tide that they end up feeling more like patch jobs.

What for me is so exciting, what has got me feeling so optimistic, is that as soon as you take head-on the big structural constraints, all the other policy work suddenly really does become the answer.

Let me give you an example: local democracy is one of Scotland’s biggest failures, being the most centralised country in the developed world. But for many communities more local democracy doesn’t counteract the fact that one very powerful local owner controls the land for as far as the eye can see. Their democratic power is severely constrained.

But if you change the structure of land ownership, if you break up those estates and let communities, normal people, small and medium-sized land-based industries and small investors actually own land in Scotland, suddenly democratic reform becomes powerful and effective.

And make no mistake; there is no Green New Deal for Scotland without major land reform – we need to build our new nation out of something and we only have the land we have on which to grow it.

But above all, it’s realising that it’s going to be much easier to change ourselves than you’d think that gives me all this hope.

Almost without fail everyone, from climate change deniers to the most evangelical environmentalists, have this way of talking about the future like is going to be about great sacrifice, that it’s frankly going to be a bit rubbish.

And in a kind of dystopian, privatised programme of climate change prevention that would be true. Corporations would still be selling you stuff at a break-neck speed and while we’d be consuming less over all, the spread of sacrifice wouldn’t be even. Frankly, when people talk about sacrifice they mean the same people who always sacrifice.

But that’s because people still get hung up on the idea that the future is just going to be like the present but with more wind turbines. In that world we still shop ourselves into misery but public services take the hit as we spend more to recycle and manage waste.

And then you change the structures of society and it becomes a different picture altogether. For example make the right investment and we all have access to better products that improve our lives. We just don’t own so many of them, we share them. It doesn’t make corporations rich, it makes us rich.

When you combine the big structural change with the many individual policy changes it amounts to something much greater than its constituent parts. It really does take away the factors which drive poverty. It really does remove some of the biggest causes of poor mental health. It really does improve our health without us having to do all that much. It really works.

No more hunger, no more fear for the future, more participation, more relaxation, the belief that the future can be better than the past, to have an income we can live comfortably on, to rediscover joy in life once we get off the relentless consumer treadmill…

I’m weary, but I’m weary because for the many months this project has been dominating my life I’ve many times lain awake in bed thinking about it, picturing it – and realising how much I really want it.

And then I wake up knackered and my kids are there (ten- and six-years-old). And I realise that I want this, I really want this – but it’s not even really for me. It’s for them.

Earlier in the year I wrote a column about how I’m damned if I’m going to shuffle off this mortal coil without seeing Scotland have the courage and conviction to do at least one great thing, one big, ambitious, life-changing thing. I am even more certain now that I cannot accept the failure to try.

And this is it. This is the big thing we need to do. It is for this we must find our courage and our determination.

Clever people laugh at utopias. Clever people know they’re an illusion. Clever people believe that hope is what you feed gullible citizens during elections and then government is about allocating power between the already powerful.

But clever people can be really stupid. Of course utopia is an illusion – it literally means ‘no such place’. That’s why they’re so important; they point the way. You don’t reach them, you chase them.

I believe this (or a very similar version of it) is the utopia of our age and it gets me out of bed in the morning, even with those bleary eyes. So many people feel hopeless just now, but I’ve never felt more hope in my life. And I can’t remember the last time I was this excited…

As of July 2017, the Bank of England measured the stock of private debt held by individuals at £1.548 trillion; making household sector indebtedness one of the biggest problems facing the United Kingdom’s economy and […]

Geopolitical contests between the U.S. and China hinge on technology more than the ability to deploy a gunboat somewhere; Taiwan could resemble a prototype for a tech proxy war Marshall Auerback is a market analyst […]